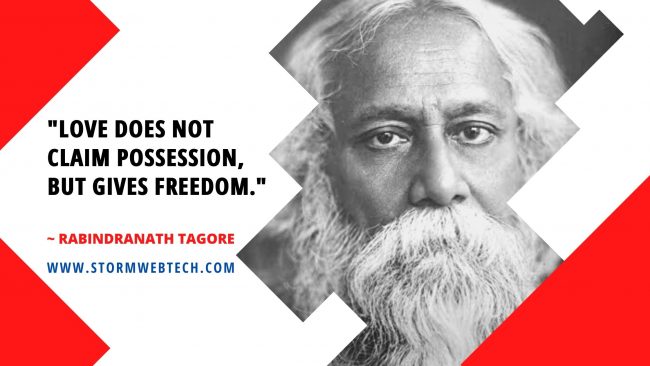 ~ Every child comes with the message that God is not yet discouraged of man.

~ Clouds come floating into my life, no longer to carry rain or usher storm, but to add color to my sunset sky.

~ Patriotism cannot be our final spiritual shelter; my refuge is humanity. I will not buy glass for the price of diamonds, and I will never allow patriotism to triumph over humanity as long as I live.

~ Where the mind is without fear and the head is held high Where knowledge is free.

~ To be outspoken is easy when you do not wait to speak the complete truth.

~ Love is an endless mystery, because there is no reasonable cause that could explain it.

~ Faith is the bird that feels the light and sings when the dawn is still dark.

~ We gain freedom when we have paid the full price for our right to live.

~ Love is not a mere impulse, it must contain truth, which is law.

~ You smiled and talked to me of nothing and I felt that for this I had been waiting long.

~ Life is given to us, we earn it by giving it.

~ Trees are the earth’s endless effort to speak to the listening heaven.

~ The weak can be terrible because they try furiously to appear strong.

~ The false can never grow into truth by growing in power.

~ Praise shames me, for I secretly beg for it.

~ The biggest changes in a women’s nature are brought by love; in man, by ambition.

~ Death is not extinguishing the light; it is only putting out the lamp because the dawn has come.

~ The one who plants trees, knowing that he will never sit in their shade, has at least started to understand the meaning of life.

~ Don’t limit a child to your own learning, for he was born in another time.

~ A mind all logic is like a knife all blade. It makes the hand bleed that uses it.

~ Let your life lightly dance on the edges of time like dew on the tip of a leaf.

~ No civilized society can thrive upon victims, whose humanity has been permanently mutilated.

~ If you cry because the sun has gone out of your life, your tears will prevent you from seeing the stars.

~ We read the world wrong and say that it deceives us.

~ The highest education is that which does not merely give us information but makes our life in harmony with all existence.

~ Reach high, for stars lie hidden in you. Dream deep, for every dream precedes the goal.

~ The butterfly counts not months but moments, and has time enough.

~ Don’t limit a child to your own learning, for she was born in another time.

~ Love’s gift cannot be given, it waits to be accepted.

~ Love does not claim possession, but gives freedom.

~ Love is the only reality and it is not a mere sentiment. It is the ultimate truth that lies at the heart of creation.

~ By plucking her petals you do not gather the beauty of the flower.

~ The most important lesson that man can learn from life, is not that there is pain in this world, but that it is possible for him to transmute it into joy.

~ Beauty is truth’s smile when she beholds her own face in a perfect mirror.

~ Beauty is simply reality seen with the eyes of love.

~ Everything comes to us that belongs to us if we create the capacity to receive it.

~ Reach high, for stars lie hidden in you. Dream deep, for every dream precedes the goal.

~ Most people believe the mind to be a mirror, more or less accurately reflecting the world outside them, not realizing on the contrary that the mind is itself the principal element of creation.

~ A teacher can never truly teach unless he is still learning himself. A lamp can never light another lamp unless it continues to burn its own flame. The teacher who has come to the end of his subject, who has no living traffic with his knowledge but merely repeats his lesson to his students, can only load their minds, he cannot quicken them.

~ Let me not pray to be sheltered from dangers, but to be fearless in facing them. Let me not beg for the stilling of my pain, but for the heart to conquer it.

~ Discipline divorced from wisdom is not true discipline, but merely the meaningless following of custom, which is only a disguise for stupidity.

~ Where the mind is without fear and the head is held high, where knowledge is free. Where the world has not been broken up into fragments by narrow domestic walls. Where words come out from the depth of truth, where tireless striving stretches its arms toward perfection. Where the clear stream of reason has not lost it’s way into the dreary desert sand of dead habit. Where the mind is led forward by thee into ever widening thought and action. In to that heaven of freedom, my father, let my country awake.

~ The smile that flickers on a baby’s lips when he sleeps- does anyone know where it was born? Yes, there is a rumor that a young pale beam of a crescent moon touched the edge of a vanishing autumn cloud, and there the smile was first born in the dream of a dew-washed morning.