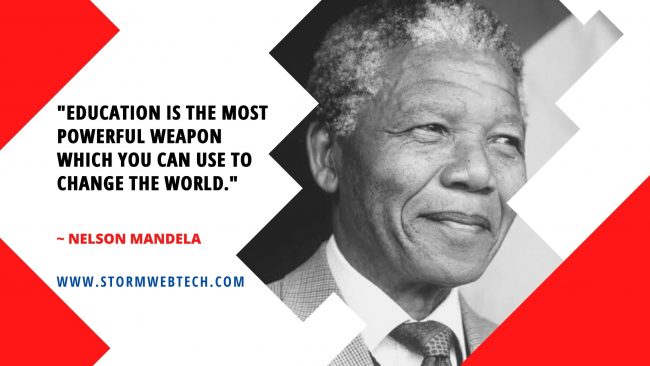 In 2009, the United Nations proclaimed Nelson Mandela’s birthday ( 18th July ) to be Nelson Mandela International Day. The holiday asks people to spend 67 minutes doing something good for others, which represents the 67 years he spent working towards the change.

~ It is easy to break down and destroy. The heroes are those who make peace and build.

~ Real leaders must be ready to sacrifice all for the freedom of their people.

~ After climbing a great hill. One only finds that there are many more hills to climb.

~ Money won’t create success, the freedom to make it will.

~ Where you stand depends on where you sit.

~ If you want the cooperation of humans around you, you must make them feel they are important, and you do that by being genuine and humble.

~ One of the things I learned when I was negotiating was that until I changed myself, I could not change others.

~ For to be free is not merely to cast off one’s chains, but to live in a way that respects and enhances the freedom of others.

~ Courageous people do not fear forgiving, for the sake of peace.

~ Live life as though nobody is watching, and express yourself as though everyone is listening.

~ Everyone can rise above their circumstances and achieve success if they are dedicated to and passionate about what they do.

~ We must use time wisely and forever realize that the time is always ripe to do right.

~ Forgiveness liberates the soul. It removes fear. That is why it is such a powerful weapon.

~ Resentment is like drinking poison and then hoping it will kill your enemies.

~ The brave man is not he who does not feel afraid, but he who conquers that fear.

~ As I have said, the first thing is to be honest with yourself. You can never have an impact on society if you have not changed yourself. Great peacemakers are all people of integrity, of honesty, but humility.

~ It is not our diversity which divides us; it is not our ethnicity, or religion or culture that divides us. Since we have achieved our freedom, there can only be one division amongst us: between those who cherish democracy and those who do not.

~ While poverty persists, there is no true freedom.

~ Difficulties break some men but make others. No axe is sharp enough to cut the soul of a sinner who keeps on trying, one armed with the hope that he will rise even in the end.

~ People respond in accordance to how you relate to them. If you approach them on the basis of violence, that’s how they’ll react. But if you say, ‘We want peace, we want stability,’ we can then do a lot of things that will contribute towards the progress of our society.

~ There can be no greater gift than that of giving one’s time and energy to help others without expecting anything in return.

~ A good head and good heart are always a formidable combination. But when you add to that a literate tongue or pen then you have something very special.

~ I learned that courage was not the absence of fear, but the triumph over it. The brave man is not he who does not feel afraid, but he who conquers that fear.

~ Many people in this country have paid the price before me and many will pay the price after me.

~ I am the master of my fate. I am the captain of my soul.

~ Man’s goodness is a flame that can be hidden but never extinguished.

~ It is what we make out of what we have, not what we are given, that separates one person from another.

~ What counts in life is not the mere fact that we have lived. It is what difference we have made to the lives of others that will determine the significance of the life we lead.

~ The greatest glory in living lies not in never falling, but in rising every time we fall.

~ No one is born hating another person because of the color of his skin, or his background, or his religion. People must learn to hate, and if they can learn to hate, they can be taught to love, for love comes more naturally to the human heart than its opposite.

~ Poverty is not an accident. Like slavery and apartheid, it is man-made and can be removed by the actions of human beings.

~ A winner is a dreamer who never gives up.

~ There is no passion to be found playing small – in settling for a life that is less than the one you are capable of living.

~ To be free is not merely to cast off one’s chains, but to live in a way that respects and enhances the freedom of others.

~ Part of being optimistic is keeping one’s head pointed toward the sun, one’s feet moving forward. There were many dark moments when my faith in humanity was sorely tested, but I would not and could not give myself up to despair. That way lays defeat and death.

~ Man’s goodness is a flame that can be hidden but never extinguished.

~ Your playing small does not serve the world. Who are you not to be great ?

~ As we are liberated from our own fear, our presence automatically liberates others.

~ You can start changing our world for the better daily, no matter how small the action.

~ A fundamental concern for others in our individual and community lives would go a long way in making the world the better place we so passionately dreamt of.

~ Lead from the back and let others believe they are in front.

~ When people are determined they can overcome anything.

~ I never lose. I either win or learn.

~ One of the most difficult things is not to change society — but to change yourself.

~ May your choices reflect your hopes, not your fears.

~ I like friends who have independent minds because they tend to make you see problems from all angles.

~ Do not judge me by my successes, judge me by how many times I fell down and got back up again.

~ It is in the character of growth that we should learn from both pleasant and unpleasant experiences.

~ Poverty is not an accident. Like slavery and apartheid, it is man-made and can be removed by the actions of human beings.

~ A critical, independent and investigative press is the lifeblood of any democracy. The press must be free from state interference. It must have the economic strength to stand up to the blandishments of government officials. It must have sufficient independence from vested interests to be bold and inquiring without fear or favour. It must enjoy the protection of the constitution, so that it can protect our rights as citizens.

~ Sometimes it falls upon a generation to be great. You be that great generation. Let your greatness blossom. Of course the task will not be easy. But not to do this would be a crime against humanity, against which I ask all humanity now to rise up.

~ Appearances matter — and remember to smile.