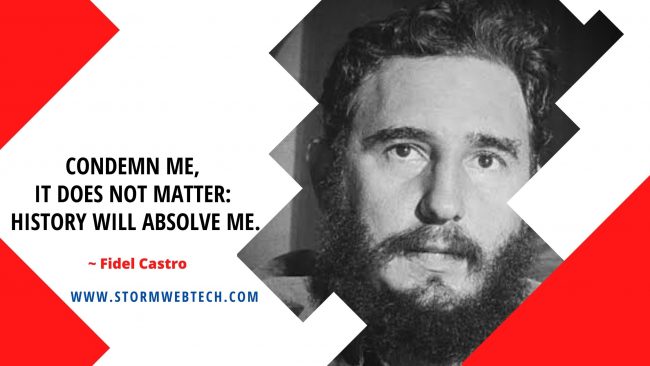 ~ Defending peace is the duty of all.

~ For my dead comrades, I claim no vengeance.

~ Nothing in the world is irreversible, not even capitalism.

~ Capitalism is using its money. we socialists throw it away.

~ Condemn me, it does not matter: history will absolve me.

~ Men do not shape destiny. Destiny produces the man for the hour.

~ Something must be done to save humanity. A better world is possible.

~ Capitalism has neither the capacity, nor the morality, nor the ethics to solve the problems of poverty.

~ They talk about the failure of socialism but where is the success of capitalism in Africa, Asia and Latin America?

~ I find capitalism repugnant. It is filthy, it is gross, it is alienating. because it causes war, hypocrisy and competition.

~ None of us has any personal interest above the interests of the country. Our country is more important than our careers.

~ I began the revolution with 82 men. If I had to do it again, I would do it with 10 or 15 and absolute faith. It does not matter how small you are if you have faith and a plan of action.

~ The ever more sophisticated weapons piling up in the arsenals of the wealthiest and the mightiest can kill the illiterate, the ill, the poor and the hungry but they cannot kill ignorance, illnesses, poverty or hunger.

~ The fact is, when men carry the same ideals in their hearts, nothing can isolate them – neither prison walls nor the sod of cemeteries. For a single memory, a single spirit, a single idea, a single conscience, a single dignity will sustain them all.

~ When I was a young boy, my father taught me that to be a good Catholic, I had to confess at church if I ever had impure thoughts about a girl. That very evening, I had to rush to confess my sin. And the next night, and the next. After a week, I decided religion wasn’t for me.

~ The equal right of all citizens to health, education, work, food, security, culture, science, and wellbeing – that is, the same rights we proclaimed when we began our struggle, in addition to those which emerge from our dreams of justice and equality for all inhabitants of our world – is what I wish for all.

~ I feel my belief in sacrifice and struggle getting stronger. I despise the kind of existence that clings to the miserly trifles of comfort and self-interest. I think that a man should not live beyond the age when he begins to deteriorate, when the flame that lighted the brightest moment of his life has weakened.

~ Soon, I’ll be like all the others. The time will come for all of us, but the ideas of the Cuban Communists will remain as proof on this planet that if they are worked at with fervor and dignity, they can produce the material and cultural goods that human beings need, and we need to fight without a truce to obtain them.