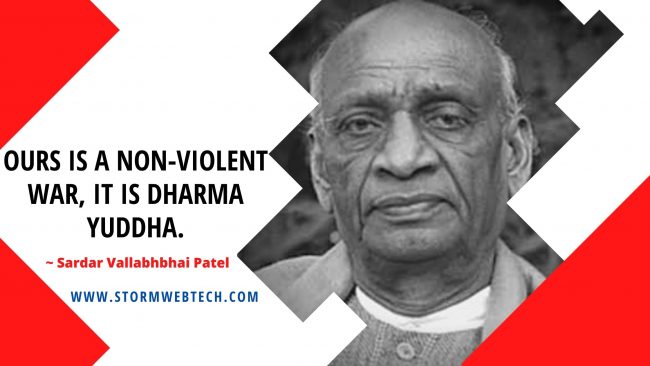 ~ It is in my nature to be a friend of the friendless.

~ Ours is a non-violent war, It is Dharma YUDDHA.

~ Religion is a matter between the man and his Maker.

~ Tell Churchill to save England first before saving India.

~ Satyagraha is not a creed for the weak or the cowardly.

~ In a domestic government, unity and co-operation are essential requisites.

~ Today we must remove distinctions of high and low, rich and poor, caste and creed.

~ The main task before India today is to consolidate herself into a well-knit and united power.

~ Faith is no avail in absence of strength. Faith and strength, both are essential to accomplish any great work.

~ There is something unique in this soil, which despite many obstacles has always remained the abode of great souls.

~ Your goodness is impediment in your way, so let your eyes be red with anger, and try to fight injustice with a firm hand.

~ Every citizen of India must remember that he is an Indian and he has every right in this country but with certain duties.

~ Manpower without unity is not a strength unless it is harmonized and united properly, then it becomes a spiritual power.

~ Caste, Community will rapidly disappear. We have to speedily forget all these things. Such boundaries hamper our growth.

~ My only desire is that India should be a good producer and no one should be hungry, shedding tears for food in the Country.

~ By common endeavour we can raise the country to a new greatness, while a lack of unity will expose us to fresh calamities.

~ One can take the path of revolution but the revolution should not give a shock to the society. There is no place for violence in revolution.

~ Even if we lose the wealth of thousands, and our life is sacrificed, we should keep smiling and be cheerful keeping our faith in God and Truth.

~ A war based on Satyagraha is always of two kinds. One is the war we wage against injustice, and the other we fight against our own weaknesses.

~ The negligence of a few could easily send a ship to the bottom, but if it has the wholehearted cooperation of all on board it can be safely brought to part.

~ It is only so long as a man can retain the child in him that life can be free from those dark shadows which leave inevitable furrows on a man’s forehead.

~ Two ways of building character – cultivating strength to challenge oppression, and tolerate the resultant hardships that give rise to courage and awareness.

~ Little pools of water tend to become stagnant and useless, but if they are joined together to form a big lake, the atmosphere is cooled and there is universal benefit.

~ No distinctions of caste and creed should hamper us. All are the sons and daughters of India. We should all love our country and build our destiny on mutual love and help.

~ Happiness and misery are paper balls. Don’t be afraid of death. Join the nationalist forces, be united. Give work to those who are hungry, food to invalids, forget your quarrels.

~ So long as you do not know how to die it is useless for you to learn how to kill. India will not be benefited by brutal force. If India is to be benefited it will be through non-violence.

~ The war started by Mahatmaji is against two things – the Government and secondly against one self. The former kind of war is closed, but the latter shall never cease. It is meant for self-purification.

~ Take to the path of dharma – the path of truth and justice. Don’t misuse your valour. Remain united. March forward in all humility, but fully awake to the situation you face, demanding your rights and firmness.

~ Work is undoubtedly worship but laughter is life. Anyone who takes life too seriously must prepare himself for a miserable existence. Anyone who greets joy and sorrows with equal facility can really get the best of life.

~ As satyagrahis we should always claim and we did – that we are always ready to make peace with our adversaries. As a matter of fact we are always eager for peace and when we found that the door to peace was opened we decided to enter it.

Quotes By Sardar Patel In English -:

~ We have tried to overcome our weaknesses honestly and in a definite manner. The proof, if any proof is needed, is Hindu – Muslim unity. Similarly, we have established cordial relations with Parsis, Christians and other citizens of the country.

~ We have to shed mutual bickering, shed the difference of being high or low and develop a sense of equality and banish untouchability. We have to restore the conditions of Swaraj prevalent prior to British rule. We have to live like the children of the same father.

~ It is the prime responsibility of every citizen to feel that his country is free and to defend its freedom is his duty. Every Indian should now forget that he is a Rajput, a Sikh or a Jat. He must remember that he is an Indian and he has every right in this country but with certain duties.

~ I am blunt and uncultured. To me there is only one answer to this questions. That answer is not that you should shut yourselves in colleges and learn history and mathematics while the country is on fire and everybody is fighting freedom’s battle. Your place is by the side of your countrymen, who are fighting the freedom’s battle.

~ Young men and women are to build-up a strong character. A nation’s greatness was reflected in the character of her people. If it was sullied by selfishness, such a people could not prosper or achieve great things. Selfishness had its place in life as everyone had to look to his own needs and that of his family, but it could not be made the be – all and end – all of life.