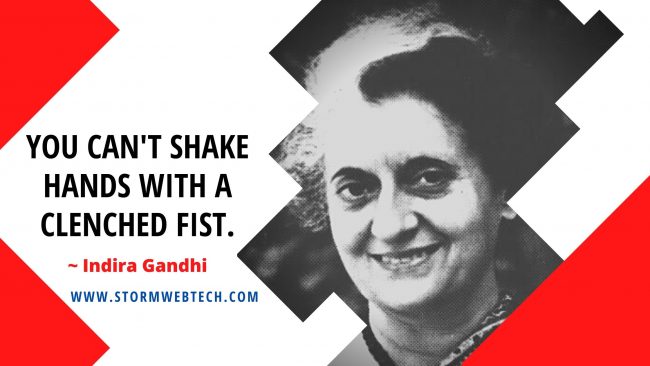 ~ Forgiveness is a virtue of the brave.

~ Popularity is not a gurantee of quality.

~ There is not love where there is no will.

~ You can’t shake hands with a clenched fist.

~ I learned very soon to get along by myself.

~ Ability is not always gauged by examination.

~ The greatest of all contraceptives is affluence.

~ To become capable, one must have faith in oneself.

~ If I see something dirty or untidy, I have to clean it up.

~ The purpose of life is to believe, to hope, and to strive.

~ Martyrdom does not end something, it only a beginning.

~ The power to question is the basis of all human progress.

~ People tend to forget their duties but remember their rights.

~ The collective judgment of the electorate must be respected.

~ I am not a person to be pressured – by anybody or any nation.

~ The meek may one day inherit the earth, but not the headlines.

~ I do not like carving the world into segments; we are one world.

~ I cannot understand how anyone can be an Indian and not be proud.

~ Whenever you take a step forward, you are bound to disturb something.

~ Every new experience brings its own maturity and a greater clarity of vision.

~ You must learn to be still in the midst of activity and vibrantly alive in repose.

~ Wearing khadi was a badge of honour. It was something one was proud to do.

~ Winning or losing of the election is less important than strengthening the country.

~ You must learn to be still in the midst of activity and to be vibrantly alive in repose.

~ I think basically I’m lazy, but I have a housewife’s mentality when I go about my job.

~ Women sometimes go too far, it’s true. But it’s only when you go too far that others listen.

~ All my games were political games; I was, like Joan of Arc, perpetually being burned at the stake.

~ I have already reached out to the janata, and I am only trying to acquaint myself with people’s problems.

~ There exists no politician in India daring enough to attempt to explain to the masses that cows can be eaten.

~ I don’t mind if my life goes in the service of the nation. If I die, every drop of my blood will invigorate the nation.

~ Opportunities are not offered. They must be wrested and worked for. And this calls for perseverance and courage.

~ One must beware of ministers who can do nothing without money, and those who want to do everything with money.

~ On the one hand, the rich look askance at our continuing poverty – on the other, they warn us against their own methods.

~ I was happy to be with my parents. I didn’t see very much of them, so I was very happy when my father was there and out of jail.

~ To be liberated, woman must feel free to be herself, not in rivalry to man but in the context of her own capacity and her personality.

~ There are grave misgivings that the discussion on ecology may be designed to distract attention from the problems of war and poverty.

~ All the people who fought for freedom were my heroes. I mean, that was the sort of story I liked reading freedom struggles and so on.

~ Have a bias toward action – let’s see something happen now. You can break that big plan into small steps and take the first step right away.

~ Happiness is a state of mind, you know. I don’t think you are permanently happy. One is happy about certain things and not so happy about others.

~ The environmental problems of developing countries are not the side effects of excessive industrialisation but reflect the inadequacy of development. (Indira Gandhi Quotes In English)

~ This is why we feel that democracy’s important: because democracy allows you to have small explosions and therefore avoid the bigger explosions.

~ If I die a violent death, as some fear and a few are plotting, I know that the violence will be in the thought and the action of the assassins, not in my dying.

~ Even if I died in the service of the nation, I would be proud of it. Every drop of my blood will contribute to the growth of this nation and to make it strong and dynamic.

Quotes By Indira Gandhi In English -:

~ We have to prove to the disinherited majority of the world that ecology and conservation will not work against their interest but will bring an improvement in their lives.

~ Education is a liberating force, and in our age it is also a democratizing force, cutting across the barriers of caste and class, smoothing out inequalities imposed by birth and other circumstances.

~ We do not wish to impoverish the environment any further, and yet we cannot for a moment forget the grim poverty of large numbers of people. Are not poverty and need the greatest polluters?

~ My grandfather once told me that there are two kinds of people: those who do the work, and those who take the credit. He told me to try to be in the first group; there was much less competition there. (Indira Gandhi Quotes In English)

~ We always said that our struggle was not only against the British as representatives of colonialism, it was against all the evil that existed in India. The evil of the feudal system, the evil of the system based on caste, the evil of economic injustice.

~ I’ve never turned to anybody for advice and counsel. Even when I was a very small child, I had to stand on my feet because of the circumstances of those times, and somehow, the circumstances have remained more or less the same. I have to take my own decisions.

~ You soon realize that the peak you’ve climbed was one of the lowest, that the mountain was part of a chain of mountains, that there are still so many, so many mountains to climb…And the more you climb, the more you want to climb – even though you’re dead tired. (Indira Gandhi Quotes In English)

~ I have lived a long life, and I am proud that I spend the whole of my life in the service of my people. I am only proud of this and nothing else. I shall continue to serve until my last breath, and when I die, I can say, that every drop of my blood will invigorate India and strengthen it. (Indira Gandhi Quotes In English)

~ Without courage, you cannot practice any other virtue. You have to have courage – courage of different kinds: first, intellectual courage, to sort out different values and make up your mind about which is the one which is right for you to follow. You have to have moral courage to stick up to that – no matter what comes in your way, no matter what the obstacle and the opposition is.