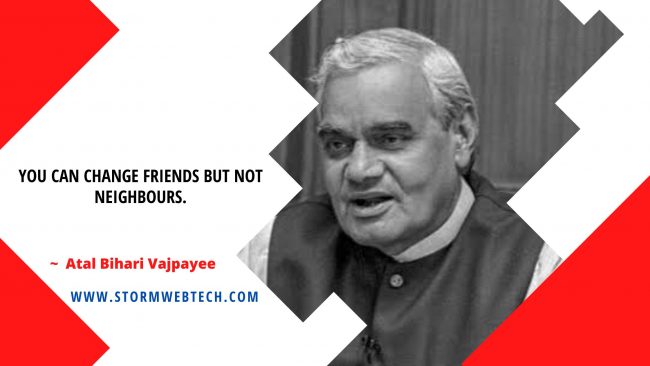 ~ For development, peace is essential.

~ You can change friends but not neighbours.

~ India is not a piece of land but a living entity.

~ Freedom is incomplete without social justice.

~ No guns but only brotherhood can resolve the problems. (Atal Bihari Vajpayee Quotes)

~ Truth cannot be hidden for fear that somebody would exploit it.

~ We hope the world will act in the spirit of enlightened self-interest.

~ I try to indulge my muse whenever I am able to get away from it all.

~ Victory and defeat are a part of life, which are to be viewed with equanimity. (Atal Bihari Vajpayee Quotes)

~ Let us together commence a journey of peace, harmony and progress in South Asia.

~ The Bio-diversity Convention has not yielded any tangible benefits to the world’s poor.

~ Indian democracy’s greatest strength is that we have always put the nation above politics.

~ I would like that no citizen of the state feels alone and helpless. The entire nation is with them. (Atal Bihari Vajpayee Quotes)

~ Our nuclear weapons are meant purely as a deterrent against nuclear adventure by an adversary.

~ It is easy to win elections by raising the slogan of “garibi hatao” but slogans do not remove poverty.

~ The reality is that international institutions like the UN can only be as effective as its members allow it to be.

~ My poet’s heart gives me the strength to face political problems, particularly those which have a bearing on my conscience.

~ I dream of an India that is prosperous, strong and caring. An India, that regains a place of honor in the comity of great nations.

~ If you do not like anything in a particular book, then sit and discuss it. Banning a book is not a solution. We have to tackle it ideologically.

~ Our aim may be as high as the endless sky, but we should have a resolve in our minds to walk ahead, hand-in-hand, for victory will be ours.

~ Empowering the individual means empowering the nation. And empowerment is best served through rapid economic growth with rapid social change.

~ We are unnecessarily wasting our precious resources in wars. If we must wage war, we have to do it on unemployment, disease, poverty and backwardness.

~ Poverty is multidimensional. It extends beyond money incomes to education, health care, political participation and advancement of one’s own culture and social organisation.

~ India has no dearth of brave young men and women and if they get the opportunity and help then we can compete with other nations in space exploration and one of them will fulfill her dreams.