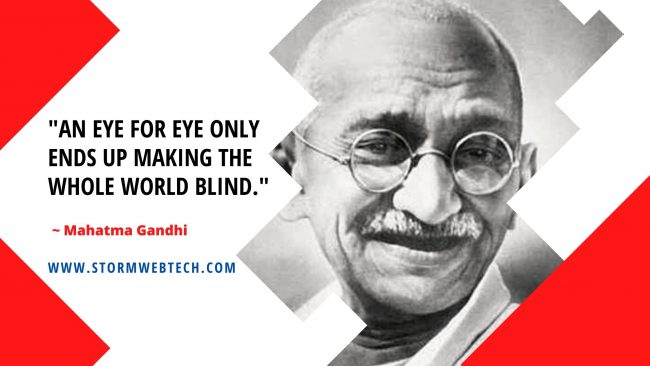 Mohandas Karamchand Gandhi known as ‘Mahatma Gandhi’ was born on 2nd October 1869 in Porbandar, Gujarat. His father’s name was Karamchand Gandhi, and his mother’s name was Putlibai Gandhi. He was a Lawyer, politician, social activist and a writer who became the leader of the nationalist movement against the British rule of India. Mahatma Gandhi was the leader of Indian Independence Movement who introduced the idea of non-violent resistance called Satyagrah. Mahatma Gandhi struggled to attain freedom for India. He protested with the motto of non-violence and due to his extreme courage, the British had to leave India.

Mohandas Karamchand Gandhi also known as the Father Of The Nation. He is popularly called Bapu. Rabindranath Tagore was the first person who used the word  ‘Mahatma’ for Gandhiji. Mahatma Gandhi ideals were Satya (truth) and Ahimsa (non-violence). Through this ideologies he fought battle of freedom for India. Mahatma Gandhi have been appreciated throughout history. He will continue to inspire people everywhere to build a better world for generations to come.

~ My life is my message.

~ Hate the sin, love the sinner.

~ There is no god higher than truth.

~ Change yourself – you are in control.

~ Poverty is the worst form of violence.

~ Nonviolence is a weapon of the strong.

~ The future depends on what you do today.

~ In a gentle way, you can shake the world.

~ Speak only if it improves upon the silence.

~ Nobody can hurt me without my permission.

~ What barrier is there that love cannot break ?

~ Love is the strongest force the world possesses.

~ An ounce of practice is worth a thousand words.

~ Be the change that you wish to see in the world.

~ The future depends on what we do in the present.

~ Satisfaction lies in the effort, not in the attainment.

~ Service without humility is selfishness and egotism.

~ If you want to change the world, start with yourself.

~ Honest disagreement is often a good sign of progress.

~ In doing something, do it with love or never do it at all.

~ The real ornament of a woman is her character, her purity.

~ It does not require money to live neat, clean, and dignified.

~ I first learned the concepts of non-violence in my marriage.

~ An eye for eye only ends up making the whole world blind.

~ I call him religious who understands the suffering of others.

~ An ounce of patience is worth more than a tonne of preaching.

~ It is health that is real wealth and not pieces of gold and silver.

~ I will not let anyone walk through my mind with their dirty feet.

~ It’s easy to stand in the crowd but it takes courage to stand alone.

~ Glory lies in the attempt to reach one’s goal and not in reaching it.

~ Truth stands, even if there be no public support. It is self-sustained.

~ Permanent good can never be the outcome of untruth and violence.

~ I cannot conceive of a greater loss than the loss of one’s self-respect.

~ You don’t know who is important to you until you actually lose them.

~ If I had no sense of humor, I would long ago have committed suicide.

~ A man is but the product of his thoughts. what he thinks, he becomes.

~ The weak can never forgive. Forgiveness is the attribute of the strong.

~ To call woman the weaker sex is a libel; it is man’s injustice to woman.

~ The best way to find yourself is to lose yourself in the service of others.

~ Whenever you are confronted with an opponent, conquer him with love.

~ A coward is incapable of exhibiting love; it is the prerogative of the brave.

~ Service which is rendered without joy helps neither the servant nor the served.

~ Freedom is not worth having if it does not include the freedom to make mistakes.

~ There are many causes I would die for. There is not a single cause I would kill for.

~ Our greatest ability as humans is not to change the world, but to change ourselves.

~ The day the power of love overrules the love of power, the world will know peace.

~ Strength does not come from physical capacity. It comes from an indomitable will.

~ Our greatest ability as humans is not to change the world, but to change ourselves.

~ Happiness is when what you think, what you say, and what you do are in harmony.

~ There is no school equal to a decent home and no teacher equal to a virtuous parent.

~ Seek not greater wealth, but simpler pleasure; not higher fortune, but deeper felicity.

~ There are two days in the year that we can not do anything, yesterday and tomorrow.

~ Each night, when I go to sleep, I die. And the next morning, when I wake up, I am reborn.

~ True education must correspond to the surrounding circumstances or it is not a healthy growth.

~ Relationships are based on four principles: respect, understanding, acceptance and appreciation.

~ What is really needed to make democracy function is not knowledge of facts, but right education.

~ The greatness of a nation and its moral progress can be judged by the way its animals are treated.

~ To give pleasure to a single heart by a single act is better than a thousand heads bowing in prayer.

~ Infinite striving to be the best is man’s duty; It is its own reward. Everything else is in God’s hands.

~ There are people in the world so hungry, that God cannot appear to them except in the form of bread.

~ Knowledge gained through experience is far superior and many times more useful than bookish knowledge.

~ You can chain me, you can torture me, you can even destroy this body, but you will never imprison my mind.

~ My religion is based on truth and non-violence. Truth is my God. Non-violence is the means of realising Him.

~ A small body of determined spirits fired by an unquenchable faith in their mission can alter the course of history.

~ You can’t change how people treat you or what they say about you. All you can do is change how you react to it.

~ I object to violence because when it appears to do good, the good is only temporary; the evil it does is permanent.

~ Strength does not come from winning. When you go through hardships and decide not to surrender, that is strength.

~ A ‘No’ uttered from the deepest conviction is better than a ‘Yes’ merely uttered to please, or worse, to avoid trouble.

~ Real education consists in drawing the best out of yourself. What better book can there be than the book of humanity ?

~ The difference between what we do and what we are capable of doing would suffice to solve most of the world’s problems.

~ If I have the belief that I can do it, I shall surely acquire the capacity to do it even if I may not have it at the beginning.

~ My imperfections and failures are as much a blessing from God as my successes and my talents and I lay them both at his feet.

~ The aim of university education should be to turn out true servants of the people who will live and die for the country’s freedom.

~ Do not judge others. Be your own judge and you will be truly happy. If you try to judge others, you are likely to burn your fingers.

~ You must not lose faith in humanity. Humanity is like an ocean; if a few drops of the ocean are dirty, the ocean does not become dirty.

~ Education should be so revolutionized as to answer the wants of the poorest villager, instead of answering those of an imperial exploiter.

~ It is unwise to be too sure of one’s own wisdom. It is healthy to be reminded that the strongest might weaken and the wisest might err.

~ If we are to teach real peace in this world, and if we are to carry on a real war against war, we shall have to begin with the children.

~ Prayer is not asking. It is a longing of the soul. It is daily admission of one’s weakness. It is better in prayer to have a heart without words than words without a heart.

~ A man who was completely innocent offered himself as a sacrifice for the good of others, including his enemies, and became the ransom of the world. It was a perfect act.

~ Don’t talk about it. The rose doesn’t have to propagate its perfume. It just gives it forth, and people are drawn to it. Live it, and people will come to see the source of your power.

~ Truth resides in every human heart, and one has to search for it there and to be guided by truth as one sees it. But no one has a right to coerce others to act according to his own view of truth.

~ Literacy in itself is no education. Literacy is not the end of education or even the beginning. By education I mean an all-round drawing out of the best in the child and man-body, mind and spirit.

~ If we could change ourselves, the tendencies in the world would also change. As a man changes his own nature, so does the attitude of the world change towards him. We need not wait to see what others do.

~ When I despair, I remember that all through history the way of truth and love have always won. There have been tyrants and murderers, and for a time, they can seem invincible, but in the end, they always fall. Think of it – always.

~ For me, the different religions are beautiful flowers from the same garden, or they are branches of the same majestic tree. Therefore, they are equally true, though being received and interpreted through human instruments are equally imperfect.

~ Man often becomes what he believes himself to be. If I keep on saying to myself that I cannot do a certain thing, it is possible that I may end by really becoming incapable of doing it. On the contrary, if I have the belief that I can do it, I shall surely acquire the capacity to do it even if I may not have it at the beginning.

~ I do believe that, where there is only a choice between cowardice and violence, I would advise violence. I would rather have India resort to arms in order to defend her honor than that she should, in a cowardly manner, become or remain a helpless witness to her own dishonor. But I believe that nonviolence is infinitely superior to violence, forgiveness is more manly than punishment.