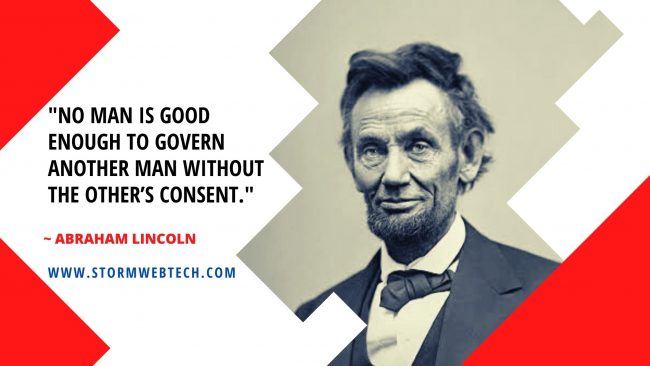 Abraham Lincoln was the 16th President of the United States from 1861 to 1865 during the American Civil War. Abraham Lincoln was born on February 12, 1809 near Hodgenville, Kentucky. Lincoln was assassinated on April 14, 1865, by well-known actor John Wilkes Booth at Ford’s Theatre in Washington, D.C.

~ Nearly all men can stand adversity, but if you want to test a man’s character, give him power.

~ The best way to predict your future is to create it.

~ I am a slow walker, but I never walk back.

~ Leave nothing for tomorrow which can be done today.

~ Those who deny freedom to others, deserve it not for themselves.

~ Always bear in mind that your own resolution to success is more important than any other thing.

~ Character is like a tree and reputation like a shadow. The shadow is what we think of it, the tree is the real thing.

~ Whenever I hear anyone arguing for slavery, I feel a strong impulse to see it tried on him personally.

~ Let every American, every lover of liberty, every well wisher to his posterity, swear by the blood of the Revolution, never to violate in the least particular, the laws of the country and never to tolerate their violation by others.

~ Most Folks are usually about as happy as they make their minds up to be.

~ If you call a dog’s tail a leg, how many legs does it have ? – Four, because calling a tail a leg does not make it a leg.

~ Honestly, if I were two-faced, would I be showing you this one ?

~ That everyone may receive at least a moderate education appears to be an objective of vital importance.

~ Human action can be modified to some extent, but human nature cannot be changed.

~ I would rather be a little nobody, then to be an evil somebody.

~ He has a right to criticize, who has a heart to help.

~ Whatever you are, be a good one.

~ Be sure you put your feet in the right place, then stand firm.

~ Better to remain silent and be thought a fool than to speak out and remove all doubt.

~ Elections belong to the people. It’s their decision. If they decide to turn their back on the fire and burn their behinds, then they will just have to sit on their blisters.

~ My Best Friend is a person who will give me a book I have not read.

~ What I want is to get done what the people desire to have done, and the question for me is how to find that out exactly.

~ Books serve to show a man that those original thoughts of his aren’t very new after all.

~ I have always found that mercy bears richer fruits than strict justice.

~ Money will cease to be master and become the servant of humanity. Democracy will rise superior to the money power.

~ You have to do your own growing no matter how tall your grandfather was.

~ Common looking people are the best in the world: that is the reason the Lord makes so many of them.

~ Things may come to those who wait, but only the things left by those who hustle.

~ Those who look for the bad in people will surely find it.

~ And in the end, it’s not the years in your life that count. It’s the life in your years.

~ If I am killed, I can die but once; but to live in constant dread of it, is to die over and over again.

~ America will never be destroyed from the outside. If we falter and lose our freedoms, it will be because we destroyed ourselves.

~ I never encourage deceit, and falsehood, especially if you have got a bad memory, is the worst enemy a fellow can have. The fact is truth is your truest friend, no matter what the circumstances are.

~ There are no bad pictures; that’s just how your face looks sometimes.

~ What is to be, will be, and no prayers of ours can arrest the decree.

~ My concern is not whether God is on our side. my greatest concern is to be on God’s side, for God is always right.

~ I distrust the wisdom if not the sincerity of friends who would hold my hands while my enemies stab me.

~ Every man’s happiness is his own responsibility.

~ I am in favor of animal rights as well as human rights. That is the way of a whole human being.

~ You can tell the greatness of a man by what makes him angry.

~ We can complain because rose bushes have thorns, or rejoice because thorn bushes have roses.

~ The greatest fine art of the future will be the making of a comfortable living from a small piece of land.

~ I am rather inclined to silence, and whether that be wise or not, it is at least more unusual nowadays to find a man who can hold his tongue than to find one who cannot.

~ The demon of intemperance ever seems to have delighted in sucking the blood of genius and of generosity.

~ Adhere to your purpose and you will soon feel as well as you ever did. On the contrary, if you falter, and give up, you will lose the power of keeping any resolution, and will regret it all your life.

~ If we have no friends, we have no pleasure; and if we have them, we are sure to lose them, and be doubly pained by the loss.

~ Love is the chain to lock a child to its parent.

~ You cannot escape the responsibility of tomorrow by evading it today.

~ The ballot is stronger than the bullet.

~ We are not enemies, but friends. We must not be enemies. Though passion may have strained, it must not break our bonds of affection. The mystic chords of memory, stretching from every battlefield and patriot grave to every living heart and hearthstone all over this broad land, will yet swell the chorus of the Union, when again touched, as surely they will be, by the better angels of our nature.