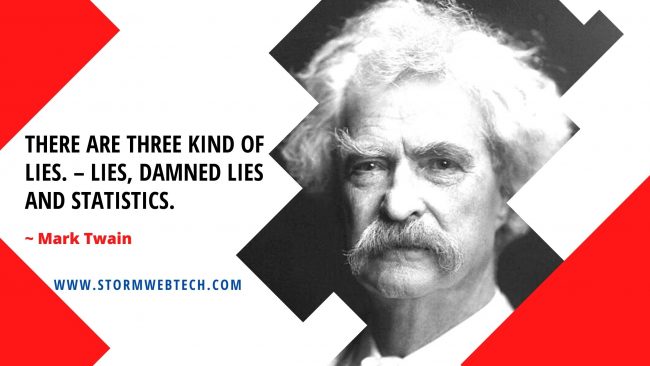 ~ The funniest things are forbidden.

~ It is wiser to find out than to suppose.

~ Stars and shadows ain’t good to see by.

~ The lack of money is the root of all evil.

~ Name the greatest of all inventors. Accident.

~ The secret of getting ahead is getting started.

~ Don’t wait. The time will never be just right.

~ Be respectful to your superiors, if you have any.

~ Human beings can be awful cruel to one another.

~ When angry count to four; when very angry swear.

~ Go to heaven for the climate, hell for the company.

~ A clear conscience is the sure sign of a bad memory.

~ Classic – a book which people praise and don’t read.

~ Sanity and happiness are an impossible combination.

~ Never tell the truth to people who are not worthy of it.

~ Out of all the things I have lost, I miss my mind the most.

~ If you tell the truth, you don’t have to remember anything.

~ I have never let my schooling interfere with my education.

~ When you fish for love, bait with your heart, not your brain.

~ The secret of success is making your vocation your vacation.

~ There are three kinds of lies: lies, damned lies and statistics.

~ Travel is fatal to prejudice, bigotry, and narrow-mindedness.

~ Wrinkles should merely indicate where the smiles have been.

~ Truth is the most valuable thing we have. Let us economize it.

~ There are no people who are quite so vulgar as the over-refined.

~ Courage is resistance to fear, mastery of fear, not absence of fear.

~ What would men be without women? Scarce, sir… mighty scarce.

~ Education: the path from cocky ignorance to miserable uncertainty.

~ Do the right thing. It will gratify some people and astonish the rest.

~ I’ve had a lot of worries in my life, most of which never happened.

~ No real gentleman will tell the naked truth in the presence of ladies.

~ To succeed in life, you need two things – Ignorance and Confidence.

~ To get the full value of joy you must have someone to divide it with.

~ Never put off till tomorrow what you can do the day after tomorrow.

~ Give every day the chance to become the most beautiful of your life.

~ I was seldom able to see an opportunity until it had ceased to be one.

~ Kindness is the language which the deaf can hear and the blind can see.

~ Good friends, good books and a sleepy conscience: this is the ideal life.

~ Age is an issue of mind over matter. If you don’t mind, it doesn’t matter.

~ Never argue with a fool. Onlooker may not be able to tell the difference.

~ I did not attend his funeral, but I sent a nice letter saying I approved of it.

~ Get your facts first, and then you can distort them as much as you please.

~ Loyalty to country ALWAYS. Loyalty to government, when it deserves it.

~ Clothes make the man. Naked people have little or no influence on society.

~ It is noble to teach oneself, but still nobler to teach others and less trouble.

~ Everyone is a moon, and has a dark side which he never shows to anybody.

~ Never put off till tomorrow what may be done day after tomorrow just as well.

~ The trouble is not in dying for a friend, but in finding a friend worth dying for.

~ Forgiveness is the fragrance that the violet sheds on the heel that has crushed it.

~ It usually takes me more than three weeks to prepare a good impromptu speech.

~ It’s good sportsmanship to not pick up lost golf balls while they are still rolling.

~ A lie can travel half way around the world while the truth is putting on its shoes.

~ Part of the success in life is to eat what you like and let the food fight it out inside.

~ Censorship is telling a man he can’t have a steak just because a baby can’t chew it.

~ Never allow someone to be your priority while allowing yourself to be their option.

~ Whenever you find yourself on the side of the majority, it is time to pause and reflect.

~ When we remember we are all mad, the mysteries disappear and life stands explained.

~ Wisdom is the reward you get for a lifetime of listening when you would rather have talked.

~ But the elastic heart of youth cannot be compressed into one constrained shape long at a time.

~ The man who does not read good books has no advantage over the man who cannot read them.

~ The most interesting information come from children, for they tell all they know and then stop.

~ It is curious that physical courage should be so common in the world and moral courage so rare.

~ The two most important days in your life are the day you are born and the day you find out why.

~ Now and then we had the hope that if we lived and were good. God would permit us to be pirates.

~ The fear of death follows from the fear of life. A man who lives fully is prepared to die at any time.

~ Don’t part with your illusions. When they are gone, you may still exist, but you have ceased to live.

~ Truth is stranger than fiction, but it is because Fiction is obliged to stick to possibilities; Truth isn’t.

~ Giving up smoking is the easiest thing in the world. I know because I’ve done it thousands of times.

~ The gentle reader will never, never know what a consummate ass he can become until he goes abroad.

~ Laughter without a tinge of philosophy is but a sneeze of humor. Genuine humor is replete with wisdom.

~ You can’t reason with your heart; it has its own laws, and thumps about things which the intellect scorns.

~ Never argue with stupid people, they will drag you down to their level and then beat you with experience.

~ Anger is an acid that can do more harm to the vessel in which it is stored than to anything on which it poured.

~ It is better to keep your mouth closed and let people think you are a fool than to open it and remove all doubt.

~ Life would be infinitely happier if we could only be born at the age of eighty and gradually approach eighteen.

~ Don’t wake up a woman in love. Let her dream, so that she does not weep when she returns to her bitter reality.

~ I have found out that there ain’t no surer way to find out whether you like people or hate them than to travel with them.

~ Right is right, and wrong is wrong, and a body ain’t got no business doing wrong when he ain’t ignorant and knows better.

~ When all else fails, write what your heart tells you. You can’t depend on your eyes when your imagination is out of focus.

~ Substitute ‘damn’ every time you’re inclined to write ‘very;’ your editor will delete it and the writing will be just as it should be.

~ Do something every day that you don’t want to do; this is the golden rule for acquiring the habit of doing your duty without pain.

~ If you pick up a starving dog and make him prosperous, he will not bite you. This is the principal difference between a dog and man.

~ The only very marked difference between the average civilized man and the average savage is that the one is gilded and the other is painted.

~ With courage you will dare to risks, have the strength to be compassionate, and the wisdom to be humble. courage is the foundation of integrity.

~ There are basically two types of people. People who accomplish things, and people who claim to have accomplished things. The first group is crowded.

~ Keep away from people who try to belittle your ambitions. Small people always do that, but the really great make you feel that you, too, can become great.

~ What do we call love, hate, charity, revenge, humanity, forgiveness ? Different results of the master impulse, the necessity of securing one’s self-approval.

~ Anyone who stops learning is old, whether twenty or eighty. Anyone who keeps learning stays young. The greatest thing you can do is keep your mind young.

~ Twenty years from now you will be more disappointed by the things that you didn’t do than by the ones you did do.So throw off the bowlines. Sail away from the safe harbor. Catch the trade winds in your sails. Explore. Dream. Discover.

~ The common eye sees only the outside of things, and judges by that, but the seeing eye pierces through and reads the heart and the soul, finding there capacities which the outside didn’t indicate or promise, and which the other kind couldn’t detect.

~ Travel is fatal to prejudice, bigotry, and narrow-mindedness, and many of our people need it sorely on these accounts. Broad, wholesome, charitable views of men and things cannot be acquired by vegetating in one little corner of the earth all one’s lifetime.

~ You believe in a book that has talking animals, wizards, witches, demons, sticks turning into snakes, burning bushes food falling from the sky, people walking on water, and all sorts of magical absurd and primitive stories, and you say that we are the ones that need help.

~ It liberates the vandal to travel — you never saw a bigoted, opinionated, stubborn, narrow-minded, self-conceited, almighty mean man in your life but he had stuck in one place since he was born and thought God made the world and dyspepsia and bile for his especial comfort and satisfaction.

~ Spiritual wants and instincts are as various in the human family as are physical appetites, complexions, and features, and a man is only at his best, morally, when he is equipped with the religious garment whose color and shape and size most nicely accommodate themselves to the spiritual complexion, angularities, and stature of the individual who wears it.