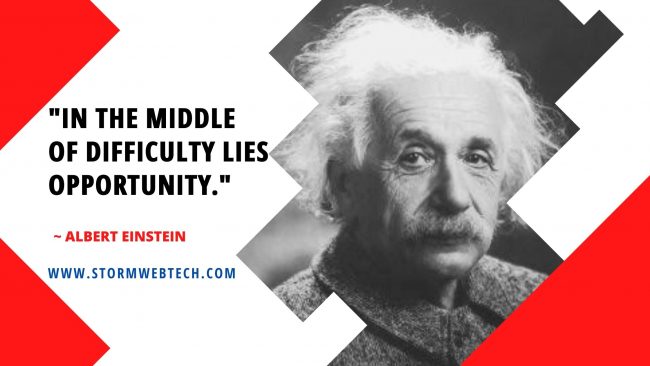 ~ If you can’t explain it simply, you don’t understand it well enough.

~ Unthinking respect for authority is the greatest enemy of truth.

~ A dictatorship means muzzles all round and consequently stultification. Science can flourish only in an atmosphere of free speech.

~ I have no special talent. I am only passionately curious.

~ It is the supreme art of the teacher to awaken joy in creative expression and knowledge.

~ Anyone who has never made a mistake has never tried anything new.

~ Let us not forget that human knowledge and skills alone cannot lead humanity to a happy and dignified life.

~ Imagination is everything. It is the preview of life’s coming attractions.

~ No problem can be solved from the same level of consciousness that created it.

~ Gravitation is not responsible for people falling in love.

~ If you can’t explain it to a six year old, you don’t understand it yourself.

~ A clever person solves a problem. A wise person avoids it.

~ Pure mathematics is, in its way, the poetry of logical ideas.

~ He who can no longer pause to wonder and stand rapt in awe, is as good as dead. his eyes are closed.

~ The difference between genius and stupidity is that genius has its limits.

~ A true genius admits that he/she knows nothing.

~ The monotony and solitude of a quiet life stimulates the creative mind.

~ It’s not that I’m so smart, it’s just that I stay with problems longer.

~ Invention is not the product of logical thought, even though the final product is tied to a logical structure.

~ A table, a chair, a bowl of fruit and a violin; what else does a man need to be happy ?

~ The secret to creativity is knowing how to hide your sources.

~ Hail to the man who went through life always helping others, knowing no fear, and to whom aggressiveness and resentment are alien. Such is the stuff of which the great moral leaders are made.

~ A question that sometimes drives me hazy — am I or are the others crazy ?

~ No problem can be solved from the same level of consciousness that created it.

~ A happy man is too satisfied with the present to dwell too much on the future.

~ Any fool can know. The point is to understand.

~ The world as we have created it is a process of our thinking. It cannot be changed without changing our thinking.

~ A human being is part of a whole called by us “Universe.”

~ Although I am a typical loner in daily life, my consciousness of belonging to the invisible community of those who strive for truth, beauty, and justice has preserved me from feeling isolated.

~ I am by heritage a Jew, by citizenship a Swiss, and by makeup a human being, and only a human being, without any special attachment to any state or national entity whatsoever.

~ In the middle of difficulty lies opportunity.

~ The great moral teachers of humanity were, in a way, artistic geniuses in the art of living.

~ All that is valuable in human society depends upon the opportunity for development accorded the individual.

~ A human being is a part of the whole called by us universe, a part limited in time and space.

~ Look deep into nature, and then you will understand everything better.

~ Concern for man and his fate must always form the chief interest of all technical endeavors. Never forget this in the midst of your diagrams and equations.

~ I speak to everyone in the same way, whether he is the garbage man or the president of the university.

~ I love to travel, but I hate to arrive.

~ A man’s ethical behavior should be based effectually on sympathy, education, and social ties and needs; no religious basis is necessary. Man would indeed be in a poor way if he had to be restrained by fear of punishment and hope of reward after death.

~ All religions, arts and sciences are branches of the same tree.

~ The most beautiful experience we can have is the mysterious.

~ If I were not a physicist, I would probably be a musician. I often think in music. I live my daydreams in music. I see my life in terms of music.

~ It is, in fact, nothing short of a miracle that the modern methods of instruction have not yet entirely strangled the holy curiosity of inquiry.

~ You never fail until you stop trying.

~ The important thing is not to stop questioning. Curiosity has its own reason for existing.

~ A hundred times every day I remind myself that my inner and outer life are based on the labors of other men, living and dead, and that I must exert myself in order to give in the same measure as I have received and am still receiving.

~ Insanity: doing the same thing over and over again and expecting different results.

~ A man should look for what is, and not for what he thinks should be.

~ The years of anxious searching in the dark, with their intense longing, their alternations of confidence and exhaustion, and final emergence into light—only those who have experienced it can understand that.

~ I believe in intuitions and inspirations. I sometimes feel that I am right. I do not know that I am.