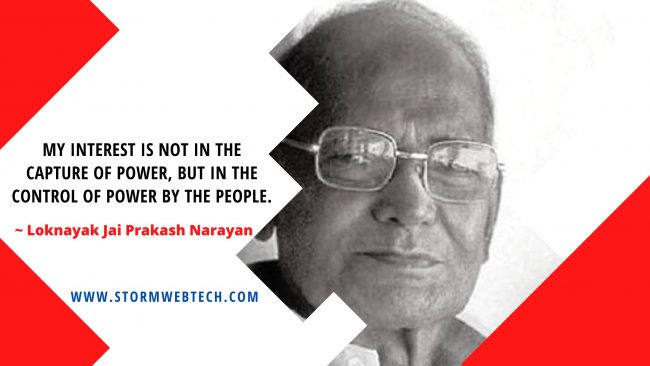 ~ True politics is about promotion of human happiness.

~ My interest is not in the capture of power, but in the control of power by the people.

~ It [Communism] did not offer an answer to the question: Why should a man be good?

~ We in the Sarvodaya movement emphasise the initiative of the people — the Lokashakti as against the Rajashakti (the power of the State).

~ Democracy cannot be made secure and strong without peace. Peace and democracy are the two sides of a coin. Neither of them can survive without the other.

~ Power comes invariably to be usurped by a handful of the most ruthless among the erstwhile revolutionaries when power comes out of the barrel of a gun and the gun is not in the hands of the common people.

~ If you really care for freedom, liberty, There cannot be any democracy or liberal institution without politics. The only true antidote to the perversions of politics is more politics and better politics. Not negation of politics.

~ A violent revolution has always brought forth a dictatorship of some kind or the other… After a revolution, a new privileged class of rulers and exploiters grows up in the course of time to which the people at large is once again subject.

~ Only those who have no faith or confidence in the people or are unable to win the people’s confidence take to violent means. Violence becomes superfluous and harmful where Lokashakti has been aroused, and in the absence of the latter violence proves to be sterile and cruel.

~ Non-materialism, by rejecting matter as the ultimate reality immediately elevates the individual to a moral plane and urges him to endeavor to realize his own true nature and fulfill the purpose of his being. This endeavor becomes the powerful motive force that drives him in its natural course to the good and the true.

~ Our means of peaceful settlement like negotiations across the table, good offices, adjudication, arbitration, friendship march and similar methods may succeed, or may fail – but there is no failure for a people who have accepted nonviolence and have prepared themselves to resist whatever evil that might come, with nonviolence.

~ You will tell me that this endless insistence on peaceful means is our Gandhian fad. But let me tell you that no such thing is being foisted on you. It is the strategy of the people’s struggle that dictates this line of action. Your success depends on scrupulous adherence to peaceful means. The other side is ready to commit a hundred acts of violence if you commit one. So please get all these notions of violence out of your heads.