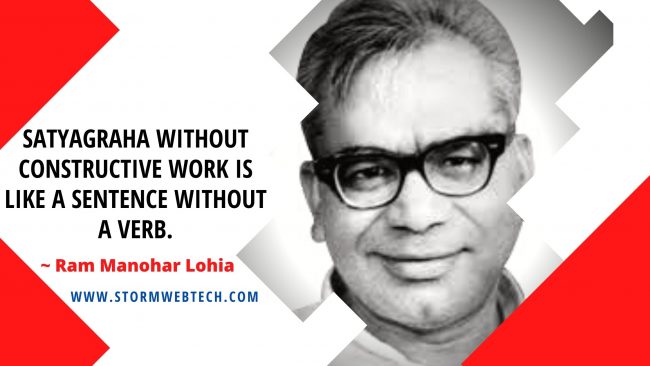 ~ Sacrifice is always peaceful and satisfying.

~ Marxism is the last weapon of Europe against Asia.

~ Inequality in india is not just economic, It is Social too.

~ The British ruled us with gunshots and English language.

~ Satyagraha without constructive work is like a sentence without a verb.

~ The ideal for the women of this country should be Draupadi, not Sita, Savitri.

~ Awakening will come in the country only by revolt against the caste system.

~ An Indian woman should be like Draupadi, who never lost her mind to a man.

~ When major social change works begin, some people in the society are passionate to oppose it.

~ There is no such dominance of English anywhere. That is why India is a slave even though it is free.

~ If a socialist government uses force, which results in the death of some people, it has no right to rule.

~ Those who speak loudly cannot make revolutions, they cannot do much work. Lustre is needed not nonsense.

~ The best way to break caste is the relationship of bread and daughter between the so-called upper and lower castes.

~ Those who speak rhetoric cannot make a revolution, cannot even do much work. Brightness is needed, not bullshit.

~ With the removal of poverty through the modern economy, these segregations (of caste) will disappear on their own.

~ When big works of social change start, then some people of the society come out of charge and oppose it completely.

~ The woman should not be like a bundle but should be so powerful that she can take the man with her as a bundle on time.

~ The limit is not only not to do, but also to do. Do not cross the line of bad, but there should be movement till the line of good.

~ Who will rule in India is decided by three things. High caste, wealth and knowledge. He who has either of these two things can rule.

~ The use of English is a hindrance to original thinking, progenitor of inferiority feelings and a gap between the educated and uneducated public. Come, let us unite to restore Hindi to its original Glory.

~ We have to increase prosperity, expand agriculture, increase the number of factories. But we should think of increasing the collective wealth. If we try to end the love for private property, then perhaps we can establish a new socialism in India.

~ Caste is the most overwhelming factor in Indian life. Those who deny it in principle accept it in practice. Life moves within the frontiers of caste and cultured men speak in soft tones against the system of caste, while its rejection in action just does not occur to them.