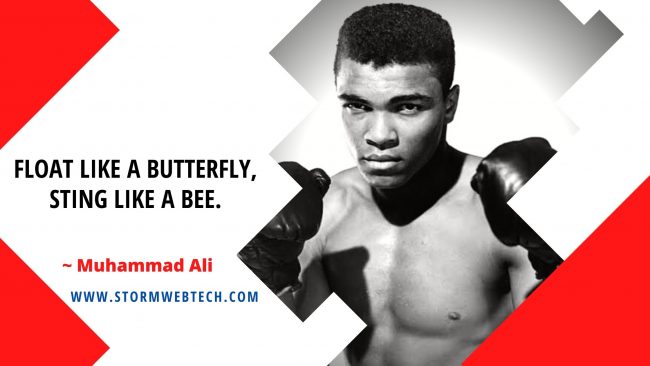 ~ What keeps me going is goals.

~ Age is whatever you think it is.

~ We can’t be brave without fear.

~ Champions aren’t made in gyms.

~ You are as old as you think you are.

~ It’s not bragging if you can back it up.

~ The critics only made me work harder.

~ My toughest fight was with my first wife.

~ His hands can’t hit what his eyes can’t see.

~ Old age is just a record of one’s whole life.

~ Put yourself out on a limb, sucka, like me!

~ You lose nothing when fighting for a cause.

~ I know I can learn to hit without getting hit.

~ I’m not the greatest, I’m the double greatest.

~ Wisdom is knowing when you can’t be wise.

~ A man who has no imagination has no wings.

~ Life is so short. The Bible says it’s like a vapor.

~ It’s hard to be humble when you’re as great as I am.

~ No one knows what to say in the loser’s locker room.

~ I don’t get hit. I’m the fastest thing on two feet man!

~ When you are as great as I am it is hard to be humble.

~ I am the greatest, I said that even before I knew I was.

~ If your dreams don’t scare you, they aren’t big enough.

~ There is a science to making your opponent wear down.

~ No one starts out on top. You have to work your way up.

~ It’s in my blood to be around people while I was training.

~ There are more pleasant things to do than beat up people.

~ Silence is golden when you can’t think of a good answer.

~ My only fault is that I don’t realize how great I really am.

~ I’ve never let anyone talk me into not believing in myself.

~ The best way to make your dreams come true is to wake up.

~ My wealth is in my knowledge of self, love, and spirituality.

~ My principles are more important than the money or my title.

~ Jokes? There are no jokes. The truth is the funniest joke of all.

~ I believe in the an eye-for-an-eye business. I’m no cheek turner.

~ I got speed and endurance. You’d better increase your insurance.

~ Service to others is the rent you pay for your room here on Earth.

~ It takes a lot out of a fighter to throw punches that land in thin air.

~ When you can whip any man in the world, you never know peace.

~ Don’t quit. Suffer now and live the rest of your life as a champion.

~ Think well of all, be patient with all, and try to find the good in all.

~ I should be a postage stamp. That’s the only way I’ll ever get licked.

~ If you even dream of beating me, you’d better wake up and apologize.

~ My way of joking is to tell the truth. That’s the funniest joke in the world.

~ When it comes to love, compassion, and other feelings of the heart, I am rich.

~ He who is not courageous enough to take risks will accomplish nothing in life.

~ Live everyday as if it were your last because someday you’re going to be right.

~ I had always been the one who picked up all the stragglers and stray followers.

~ If my mind can conceive it, and my heart can believe it — then I can achieve it.

~ Too many easy victories can ruin a fighter just as much as a long line of defeats.

~ To be a great champion you must believe you are the best. If not, pretend you are.

~ The thing that matters is how you lose. I’m not crying. My friends should not cry.

~ When you want to talk about who made me, you talk to me. Who made me, is me.

~ It isn’t the mountains ahead to climb that wear you out; it’s the pebble in your shoe.

~ There are no pleasures in a fight, but some of my fights have been a pleasure to win.

~ I know no fighter can survive the loss if he feels sorry for himself when he’s defeated.

~ The greatest victory in life is to rise above the material things that we once valued most.

~ I figured that if I said it enough, I would convince the world that I really was the greatest.

~ It’s lack of faith that makes people afraid of meeting challenges, and I believed in myself.

~ I wish people would love everybody else the way they love me. It would be a better world.

~ I had always come home like the victorious hunter bringing back big game from the jungle.

~ Recognize how every moment of our journey is an important part of the growth of our soul.

~ Inside of a ring or out, ain’t nothing wrong with going down. It’s staying down that’s wrong.

~ My style, my stamina, my system were molded down in the basement of a church in East End.

~ I am the astronaut of boxing. Joe Louis and Dempsey were just jet pilots. I’m in a world of my own.

~ I have never heard anything that affected me like those words: ‘Heavyweight Champion of the World.’

~ If you lose a big fight, it will worry you all of your life. It will plague you — until you get your revenge.

~ I learn to put my head within hitting range, force my opponent to throw blows, then learn back and away.

~ Give up what appears to be doubtful for what is certain. Truth brings peace of mind, and deception doubt.

~ Each time I thought I had achieved my ‘life’s purpose,’ I discovered it was only another step in my journey.

~ At home I am a nice guy: but I don’t want the world to know. Humble people, I’ve found, don’t get very far.

~ I’m young, I’m handsome, I’m fast, I’m pretty, and can’t possibly be beat. They must fall in the round I call.

~ I don’t count my sit-ups; I only start counting when it starts hurting because they’re the only ones that count.

~ It takes pride and tiger’s drive to build up the confidence, the ego the power to defeat an opponent in the ring.

~ I’ve wrestled with alligators. I’ve tussled with a whale. I done handcuffed lightning. And throw thunder in jail.

~ I hated every minute of training, but I said, ‘Don’t quit. Suffer now and live the rest of your life as a champion’.

~ I’m so fast that last night I turned off the light switch in my hotel room and was in bed before the room was dark.

~ You lose nothing when fighting for a cause. In my mind the losers are those who don’t have a cause they care about.

~ Others may know pleasure, but pleasure is not happiness. It has no more importance than a shadow following a man.

~ Friendship is a priceless gift that cannot be bought nor sold, but its value is far greater than a mountain made of gold.

~ Hating people because of their color is wrong. And it doesn’t matter which color does the hating. It’s just plain wrong.

~ I’ve made my share of mistakes along the way, but if I have changed even one life for the better, I haven’t lived in vain.

~ To be able to give away riches is mandatory if you wish to possess them. This is the only way that you will be truly rich.

~ I know where I’m going and I know the truth, and I don’t have to be what you want me to be. I’m free to be what I want.

~ I figure I’ll be champ for about ten years and then I’ll let my brother take over — like the Kennedys down in Washington.

~ I love children. I can never pass them by without saying something to them. They make you want to start life all over again.

~ I don’t trust anyone who’s nice to me, but rude to a waiter because they would treat me the same if I were in that position.

~ A rooster crows only when it sees the light. Put him in the dark and he’ll never crow. I have seen the light and I’m crowing.

~ I am an ordinary man who worked hard to develop the talent I was given. I believed in myself, and I believe in the goodness of others.

~ When you win so long, so much, you forget — you think your name will win. You forget the sacrifices, the work that goes into winning.

~ The fight is won or lost far away from the witnesses, behind the lines, in the gym, and out there on the road; long before I dance under those lights.

~ I do everything to make the fight come out my way, but if I’m defeated I have to get up and come back again, no matter how humiliating the loss.

~ When I won the Golden Gloves in 1960, that made me realize I had a chance. And when I won at the Olympics, that sealed it: I was the champ.

~ Truly great people in history never wanted to be great for themselves. All they wanted was the chance to do good for others and be close to God.

~ You don’t have to be in a boxing ring to be a great fighter. As long as you are true to yourself, you will succeed in your fight for that in which you believe.

~ I loved the smell of horse and hay and the sight of their beautiful bodies. Somehow it inspired me to train harder so my body could be in condition like that.

~ Impossible is just a big word thrown around by small men who find it easier to live in the world they’ve been given than to explore the power they have to change it.

~ People don’t realize what they had till it’s gone. Like President Kennedy, there was no one like him, the Beatles, and my man Elvis Presley. I was the Elvis of boxing.

~ Champions are made from something they have deep inside them-a desire, a dream, a vision. They have to have the skill, and the will. But the will must be stronger than the skill.

~ Only a man who knows what it is like to be defeated can reach down to the bottom of his soul and come up with the extra ounce of power it takes to win when the match is even.

~ Friendship is the hardest thing in the world to explain. It’s not something you learn in school. But if you haven’t learned the meaning of friendship, you really haven’t learned anything.

~ When a fighter is beaten, everybody who believes in him is beaten too — his family, his friends, his children, the people who cheer him on, who give him their love, their hope, their pride.

~ I’m the most recognized and loved man that ever lived cuz there weren’t no satellites when Jesus and Moses were around, so people far away in the villages didn’t know about them.

~ I may have been the best fighter, but I was also the poorest. I had never been able to afford a first-class mouthpiece to protect my teeth. I had to wait until other fighters finished so I could borrow their headgear, or their trunk or bandages.

~ I would like to be remembered as a man who won the heavyweight title three times. Who was humorous and who treated everyone right. As a man who never looked down on those who looked up to him, and who helped as many people as he could. As a man who stood up for his beliefs no matter what. As a man who tried to unite all humankind through faith and love. And if all that’s too much, then I guess I’d settle for being remembered only as a great boxer who became a leader and a champion of his people. And I wouldn’t even mind if folks forgot how pretty I was.