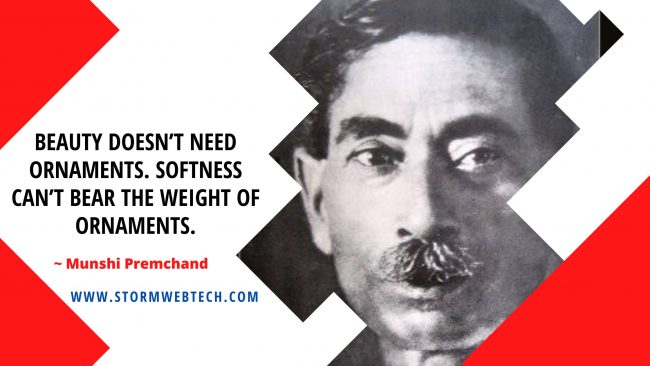 ~ Trust is the first step to love.

~ My life is simple and rough.

~ Wealth and compassion are opposites.

~ Good looks can stand anything but insult.

~ Death won’t come because you called him. (Munshi Premchand Quotes)

~ What the world calls sorrow is really joy to the poet.

~ A person whose actions go against his principles is hardly an idealist.

~ Parents are one’s companions in life but not partakers of one’s karma.

~ People are so selfish. Those you help are the ones who turn against you.

~ To be successful in life what you need is education, not literacy and degrees.

~ What people think in their heart gets out, no matter how much they try to hide it.

~ We all have to die some day. Not very many immortals have shown up in this world.

~ If brothers don’t help each other in times of need, how do you think life will ever go on ?

~ The first condition of marriage between a man and a woman is that both must belong to each other totally.

~ A household can never appear prosperous without a cow. How auspicious it is to wake up in the morning to the mooing of your own cow.

~ If there were a being in the world whose eyes could look into other people’s hearts, very few men or women would be able to face up to it.

~ We think these big people are very happy, but the truth is they are worse than us. We are just worried about one thing – hunger; they have a thousand worries. (Munshi Premchand Quotes)

~ If someone ensures us two square meals a day, we will sing and pray all our waking hours. If one has to hoe sugarcane all day, devotion to God vanishes like smoke.

~ The bird hovering over a tiny seed eventually fell upon the seed. How will his life end, whether in a cage or under the butcher’s knife – who knows what will happen ?

~ I believe that if man and woman cherish the same ideals and think alike, then the marriage can be complementary to each other’s work instead of being a hindrance.

~ The world assumes that we are very happy with high mansions, fine carriages, servants and attendants, huge investments, and concubines. But he who is without the honor and strength of the soul can be anything but happy.

~ Since the day Brahma created the world to this day, no one’s ever been able to satisfy a wedding guest. They always find some opportunity or other to find fault and criticise. One who can’t even afford a dry piece of bread at home becomes a lord at the wedding party. (Munshi Premchand Quotes)

~ Trees bear fruits only to be eaten by others; the fields grown grains, but they are consumed by the world. Cows give milk, but she doesn’t drink it herself – that is left to others. Clouds send rain only to quench the parched earth. In such giving, there is little space for selfishness.

~ Illness and problems are the specialties of life. But the death of a child is a cause of mental agony which can be overcome if one concedes this world to be a stage or stadium wherein praiseworthy are those who are not proud of their achievement and those who do not cry at their defeat.

~ A worshipper of science says a subtle radiance leaves the body. Devotees of the science of imagination say the vital essence may emerge from the eyes, from the mouth, from the top of the head. Let someone ask them, when a wave is being absorbed, is there a spark? When a sound is vanishing, does it become incarnated? This is merely a rest during that endless journey, not where the journey ends, but where it begins anew.