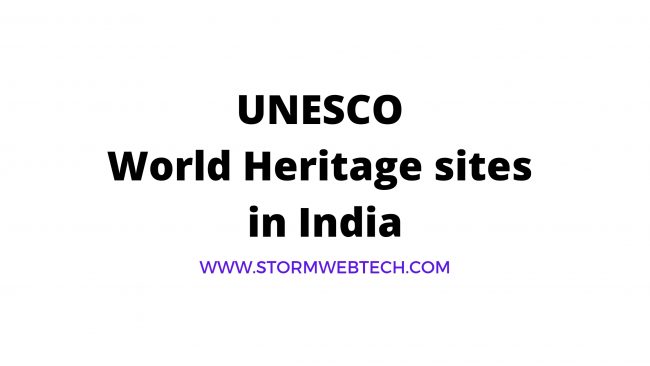 UNESCO ( United Nations Educational Scientific and Cultural Organization ) is a agency of the United Nations, founded in 1945. UNESCO’s headquarter is situated in Paris, France. It is made for the promotion of international collaboration in science, education and culture.

For a property to be included on the UNESCO World Heritage Sites List, sites must be of outstanding universal value and meet at least one out of ten selection criteria.

These monuments belongs to Chandela Dynasty. These temples were built between 900 and 1130. Khajuraho temples belong to two religions – Hinduism and Jainism.

These Buddhist monuments are situated in Raisen district of Madhya Pradesh. It is considered one of the oldest Buddhist Sanctuary. The Great Stupa at Sanchi was originally built by the Mauryan emperor Ashoka.

Dr Vishnu Shridhar Wakankar had discovered the Rock Shelters of Bhimbetka in 1958. These Bhimbetka rock caves exhibit one of the earliest traces of human life in India.

The Red Fort of Agra is the 16th Century Mughal Monument. Agra Fort is the first UNESCO world heritage sites in India.

Taj Mahal is built by the Mughal emperor, Shahjahan in memory of his wife Mumtaz Mahal. It is situated on the banks of the river Yamuna in Agra, Uttar Pradesh.

Fatehpur Sikri was built in 16th century near Agra, Uttar Pradesh by Emperor Akbar. Fatehpur Sikri means The City of Victory were the capital of the Mughal empire for some time.

Keoladeo National Park is located in Bharatpur, Rajasthan. It is also known as Bharatpur Bird Sanctuary.

The walled city of Jaipur was founded in 1727 by the King Sawai Jai Singh II.

Ajanta Caves is a series of rock-cut caves in the Western Ghats near Aurangabad in Maharashtra. These caves were developed between 200 B.C. and 650 A.D. There are 29 caves. All caves belongs to the Buddhist. 25 caves were used as Viharas or residential caves while 4 caves were used as Chaitya or prayer halls.

Ellora Caves are also located in the Western Ghats near Aurangabad in Maharashtra. These caves were developed between 5th and 11th centuries A.D. There are 34 caves – 17 Brahmanical, 12 Buddhist and 5 Jain.

Elephanta Caves are Located at Elephanta island or island of Gharapuri near Mumbai in Maharashtra. These caves were developed between 5th and 6th centuries AD. There are total seven caves.

Chhatrapati Shivaji Terminus was formerly known as Victoria Terminus. It was built in 1887 with Victorian Gothic Revival architecture based design in Mumbai.

Humayun’s Tomb was built in 1570. It was the first garden-tomb in India.

Qutub Minar and its Monuments -:

Qutub Minar was built in 13th century, in Delhi. Qutb-ud-din Aibak started construction of the Qutub Minar in 1199.

Red Fort was built by Mughal Emperor Shah Jahan. Salimgarh Fort is also a part of this Red Fort complex.

Champaner – Pavagadh was built between 8th and 14th centuries. It remains of the 16th century capital of the Gujarat.

Rani-ki-Vav Situated on the banks of Saraswati river in Patan, Gujarat. The Queen’s Stepwell is built in Maru-Gurjara architectural style.

Sultan Ahmad Shah founded the city in the 15th Century on the eastern bank of Sabarmati river.

Dholavira was discovered by archaeologist Jagat Pati Joshi in 1968. It was Indus Valley Civilization’s fifth-largest metropolis after Mohen-jo-Daro, Ganweriwala, Harappa and Rakhigarhi. In ancient India, Dholavira was a commercial and manufacturing hub for about 1,500 years. Dholavira is an outstanding example of Harappan urban planning, with pre-conceived city planning, multilayered fortifications, drainage system and the extensive use of stone as a building material. It had tanks to store rainwater or fresh water harvested from other sources.

Mahabodhi Temple was built by Emperor Asoka at Bodhgaya, Bihar. It is one of the four holy sites related to the Buddha’s life.

Nalanda Mahavihara is the most ancient university in India. It is situated at Nalanda,Bihar.

Group of Monuments at Hampi -:

Hampi was the last capital of the kingdom of Vijaynagar. It is situated in Karnataka. These temples and palaces were built by rulers of Vijaynagar between the 14th and 16th centuries.

Group of Monuments at Pattadakal -:

Monuments at Pattadakal are situated on the banks of the river Malprabha in Karnataka. These monuments represent the Chalukyan art.

Group of Monuments at Mahabalipuram -:

Mahabalipuram is situated at Kanchipuram, Tamilnadu. Group of Monuments at Mahabalipuram was founded by Pallava kings in the 7th and 8th centuries.

Churches and Convents of Goa -:

Churches and Convents of Goa was developed under the Portuguese.

Sundarbans National Park is a national park, tiger reserve and biosphere reserve in West Bengal, India. The Sundarbans mangrove forest lies across India and Bangladesh on the delta of the Ganges, Brahmaputra and Meghna rivers on the Bay of Bengal.

Nanda Devi and Valley of Flowers National Parks are located in Uttarakhand.

Western Ghats consist of a chain of mountains running parallel to India’s Western Coast and passing from the states of Kerala, Maharashtra, Gujarat, Goa, Tamil Nadu and Karnataka.

Kanchenjunga National Park is in Sikkim. It is the one and only mixed UNESCO world heritage sites in India.

The Architectural Work of Le Corbusier -:

The Architectural Work of Le Corbusier includes 17 sites on three continents. Complexe du Capitole in Chandigarh, India is a part of this site. It is called as an Outstanding Contribution to the Modern Movement.

The Kakatiya Rudreshwar Temple of Telangana has been included in the list of World Heritage Sites by UNESCO in 2021. Built on a six feet high star-like platform, this temple is dedicated to Lord Shiva. Ramalingeshwara Swamy is mainly worshiped in this temple. This temple is a unique specimen of ancient architectural craft built on thousand pillars. It was built in the 13th century. It was built by the craftsman Ramappa after 40 years of tireless effort. That is why this 800 year old temple is also known as Ramappa Temple. Marco Polo called this temple built during the Kakatiya dynasty as the brightest star among all the temples.

How many UNESCO World Heritage Sites in India in 2022 ?

There are total 40 UNESCO World Heritage Sites in India in 2022.

Which state has highest UNESCO World Heritage Sites in India ?

Which site is the first UNESCO world heritage site in India?

Which is the latest UNESCO world heritage site in India ?