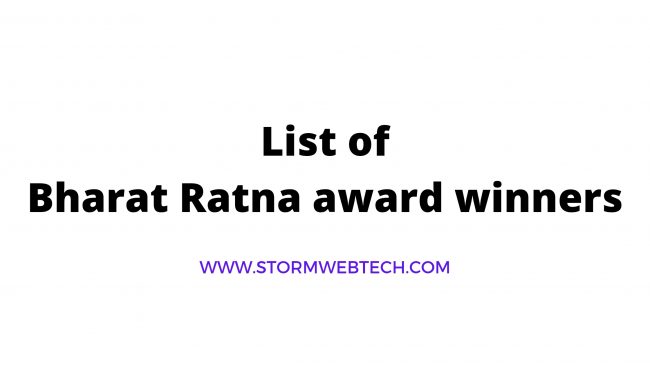 ~ Bharat Ratna Award is the highest civilian award of the India.

~ The recommendations for the Bharat Ratna award are made by the Prime Minister of India to the President of India.

~ It is given for exceptional service to the nation towards the advancement of Science, Literature and Art, Sports and in recognition of Public Service of the highest order. In December 2011, the Government of India modified the criteria to allow sportsperson to receive the award. since then, the Bharat Ratna award can be given for the performance of highest order in any field of human endeavor.

~ Maximum three persons can be awarded in a specific year.

~ It is not mandatory that Bharat Ratna has to be awarded every year.

~ Any person without distinction of race, occupation, position or sex is eligible for the award.

~ Bharat ratna award medal changes with the time. Earlier the medal was made of gold circle 35 mm in diameter with a centered sunburst design on the obverse side. The text Bharat Ratna in Devanagari Script, is inscribed on the upper edge in silver gilt with a wreath set along on the lower edge. A platinum State Emblem of India was placed in the centre of the reverse side with the national motto Satyameva Jayate ( Truth alone triumphs ) in Devanagari Script, inscribed in silver-gilt on the lower edge.

~ A year later In 1955, the medal was modified. Now The current medal is in the shape of a peepal leaf, approximately 59 mm long, 48 mm wide and 3.2 mm thick and rimmed in platinum. The embossed sunburst design, made of platinum. The words Bharat Ratna on the obverse side remained the same as the 1954 design as did the emblem of India and Satyameva Jayate on the reverse side. In 1957, the silver-gilt decoration was changed to burnished bronze. The medallion is worn around the neck using a white ribbon.

~ Bharat Ratna Award Winners do not recieve any prize money.

~ The first female recipient of Bharat Ratna was Indira Gandhi.

~ Sachin Tendulkar is the youngest person to recieve Bharat Ratna Award at the age of 40 years.

~ Former Prime Minister Lal Bahadur Shastri was the first person to have received the Bharat Ratna posthumously in 1966.

~ There is no formal provision that Bharat Ratna winners should be Indian citizens only. Bharat Ratna has been awarded to a naturalized Indian citizen, Mother Teresa (1980) and to two non-Indians, Khan Abdul Ghaffar Khan (1987) and Nelson Mandela (1990).