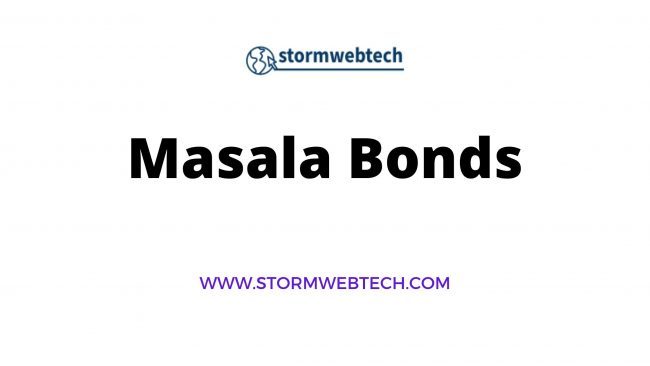 ~ Masala Bonds are rupee-denominated debt securities issued outside India by Indian companies or entity. Masala bonds are regulated by the Indian currency instead of dollars or local denomination. if the rupee rates fall, investors bear the risk..

~ The Masala Bond was first issued on 10 November 2014 by the International Finance Corporation (IFC), a member of the World Bank Group, to develop infrastructure in India.

~ Masala is an Indian word. The name Masala Bond was suggested by IFC. The term was used by the International Finance Corporation (IFC) to promote the culture and cuisine of India.

~ The objective of Masala Bonds is to fund infrastructure projects in India, fuel internal growth via borrowings and internationalise the Indian currency.

~ According to RBI – any corporate, body corporate and Indian bank is eligible to issue Masala Bonds – Rupee denominated bonds overseas.

~ This is a corporate bond. Which is issued in the international market in Indian Rupees. Before masala bonds, Indian companies used to issue bonds in dollars for foreign investment. Indian companies had to bear the loss due to fluctuations in the value of the dollar.

~ Masala Bonds are also listed on the London Stock Exchange.

~ The minimum maturity period of Masala Bonds is 3 years. If the masala bond exceeds USD 50 billion, the period is 5 years.

~ Indian companies can raise an amount equivalent to US$ 50 billion per annum through masala bond without prior approval. If companies want to raise more than this limit, then they will have to take the permission of the Reserve Bank of India.

~ Rupee raised through Masala Bonds cannot be used for real estate activities other than for development of integrated township or affordable housing projects. It also can’t be used for investing in capital markets, purchase of land.

~ Public Sector Unit NTPC had issued the first Corporate Green Masala Bonds worth Rs 2,000 crore in the month of August 2016.

~ Kerala is the first Indian state to issue masala bonds. The Kerala Infrastructure Investment Fund Board has issued Masala Bonds worth Rs 2,150 crore on the London Stock Exchange In 2019.

~ The foreign portfolio investment (FPI) limit for corporate bonds (including masala bonds) currently stands at Rs 2,44,323 crore which includes masala bonds of only Rs 44,001 crore. RBI has made a rule with effect from October 3, 2017 that Masala Bonds will no longer be a part of Foreign Portfolio Investors (FPIs), it will now be considered as a part of External Commercial Borrowing. Now if a corporate house wants to sell Masala Bonds abroad, then it only has to take permission from the Reserve Bank.