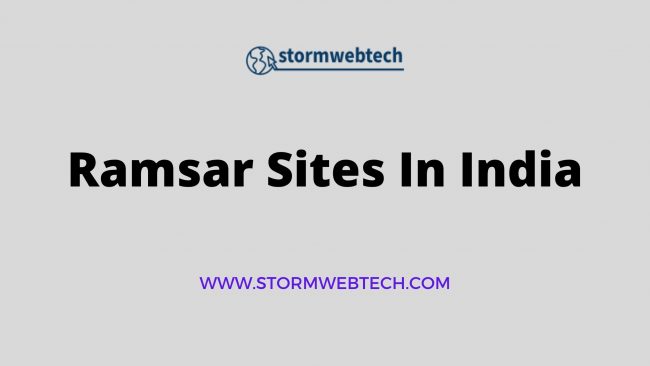 Two new Ramsar sites were announced on the occasion of World Wetland Day 2022. Now the total number of protected wetlands / Ramsar sites in India has increased to 49. Khijadia Bird Sanctuary in Gujarat and Bakhira Wildlife Sanctuary in Uttar Pradesh have been declared as Ramsar sites.

~ The aim of Ramsar Convention was “conservation and wise use of wetlands with local, national and international cooperation for overall sustainable development of the world”.

~ The list of Ramsar sites aims to develop an international network of wetlands. that are important to human life through the conservation of global biodiversity and the maintenance and benefits of their ecosystem components and processes.

~ A wetland area is an area where the land is covered with water. It include mangroves, marshes, rivers, lakes, deltas, floodplains and flooded forests, rice-fields, coral reefs, marine areas no deeper than 6 metres at low tide, as well as human-made wetlands such as waste-water treatment ponds and reservoirs

~ The wetland area is one of the most productive ecosystems on Earth. It provides many important services to human society such as water for irrigation, fisheries, non-timber products, water supply and biodiversity maintenance etc. The wetland area also reduces the effects of floods by absorbing water. This reduces the speed of water flow.

~ There are currently more than 2400 Ramsar sites in the world covering an area of 2.5 million sq. kilometres.

~ The world’s first Ramsar site was declared in 1974. Which was the Cobourg Peninsula, located in Australia.

~ The Ramsar convention came into force in India on 1 February 1982.

~ The National Wetlands Conservation Program was implemented in the year 2012-13 for the conservation and management of wetlands in India.

~ The Sundarbans Wetland located in West Bengal is the largest Ramsar site in India. It is spread over an area of ​​about 4230 square kilometres.

~ Renuka Wetland area located in Himachal Pradesh is the smallest Ramsar site in India. It is spread over an area of ​​about 0.2 square kilometer.

~ Uttar Pradesh has the highest number of 10 Ramsar sites in India.

` In October 1981, two sites in India were first declared as Ramsar sites. Chilika Lake in Odisha and Keoladeo National Park in Rajasthan.

Currently how many Ramsar sites are in India ?

Which is the smallest Ramsar Site in India ?

Which is the largest Ramsar Site in India ?

Which is the 49 Ramsar sites in India ?