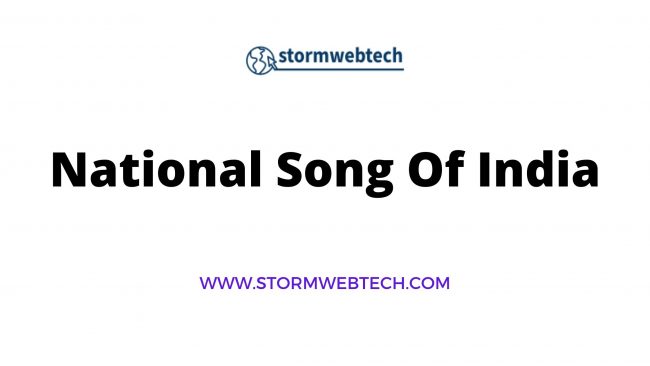 What Is National Song Of India ?

~ The National Song has been composed by the great litterateur Bankim Chandra Chattopadhyay. He composed Vande Mataram in the year 1882 in a mixed language of Sanskrit and Bengali. It was a source of inspiration to the people in their struggle for freedom. Vande Mataram also enjoys the same status as the national anthem of India ‘Jana-Gana-Mana’.

~ The National Song of India is taken from the novel Anand Math by Bankim Chandra Chattopadhyay in 1882.

~ “God! Save the Queen” was a famous British song. This song was made compulsory in every function in India also. Bankim Chandra Chattopadhyay was very offended by this attitude of the British and hence he composed a song in 1876 and titled “Vande Mataram”.

~ After attaining independence from the British, Dr. Rajendra Prasad, the first President of India, presented a resolution in the Constituent Assembly on 24 January 1950 to adopt ‘Vande Mataram’ as the national song. Which was accepted by the Constituent Assembly. And the two opening verses of Vande Mataram were officially declared as the national song of India.

~ On January 24, 1950, the President, Dr. Rajendra Prasad came up with a statement in the Constituent Assembly, “the song Vande Mataram, which has played a historic part in the struggle for Indian freedom, shall be honoured equally with Jana Gana Mana and shall have equal status with it.”

~ The duration of the national song of India is 65 seconds.

~ The National Song of India was first sung in the year 1896 in the session of the Indian National Congress.

~ Sri Aurobindo Ghosh translated Vande Mataram lyrics into English language and after translation, it was first published on 20th November 1909.

~ Five years later, Vande Mataram was sung again by Dakhina Charan Sen during the Congress session in Calcutta itself in 1901.

~ In the year 1905, it was sung again by the great poet Sarla Devi Chaudharani in the Congress session of Banaras.

~ A magazine was started by Lala Lajpat Rai in the name of Vande Mataram.

~ In the year 1905, a political film was made by Hiralal Sen named Vande Mataram.

~ Vande Mataram was written in the center of the first edition of the Indian flag made by Bhikaji Cama in 1907.

I bow to thee, Mother,
richly-watered, richly-fruited,
cool with the winds of the south,
dark with the crops of the harvests,
The Mother!
Her nights rejoicing in the glory of the moonlight,
her lands clothed beautifully with her trees in flowering bloom,
sweet of laughter, sweet of speech,
The Mother, giver of boons, giver of bliss.