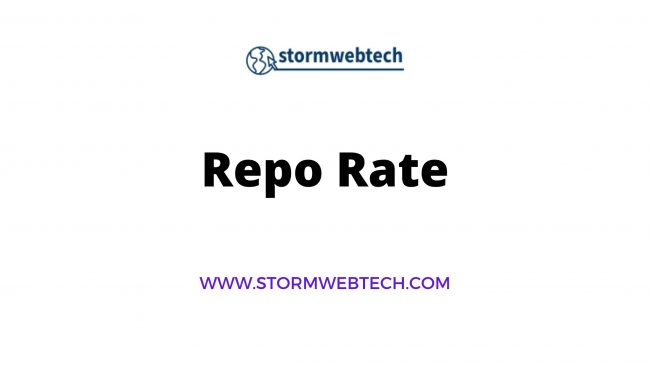 ~ Repo rate is the rate at which commercial banks borrow money by selling their securities to the Central bank of the country to maintain liquidity, in case of shortage of funds or due to some statutory measures. Repo rate is used by monetary authorities to control inflation. Repo rate can be defined as an amount of interest that is charged by the Central bank of the country while lending funds to the commercial banks.

~ The central bank provides these short terms loans against securities such as treasury bills or government bonds.

~ The Repo Rate in India is controlled by the Reserve Bank of India.

~ The Central bank increases or decreases the Repo rate depending on the inflation. Thus, it aims at controlling the economy by keeping inflation in the limit.

~ The Central bank lends money for a short period of time, maximum being an overnight post which the banks buy back their securities deposited at a predetermined price.

~ Repo rate is a powerful weapon of the monetary policy of a country that can regulate the country’s money supply, inflation levels, and liquidity.

~ A decrease in the repo rates helps in improving the growth and economic development of the country. A decline in the repo rate can lead to the banks bringing down their lending rate which is beneficial for retail loan borrowers.

~ During high levels of inflation, Central bank makes strong attempts to bring down the flow of money in the economy. One way to do this is by increasing the repo rate. This makes borrowing a costly affair for businesses and industries, which in turn slows down investment and money supply in the market. As a result, it negatively impacts the growth of the economy, which helps in controlling inflation.

~ When the Central bank needs to pump funds into the system, it lowers the repo rate. Consequently, businesses and industries find it cheaper to borrow money for different investment purposes. It also increases the overall supply of money in the economy. This ultimately boosts the growth rate of the economy.